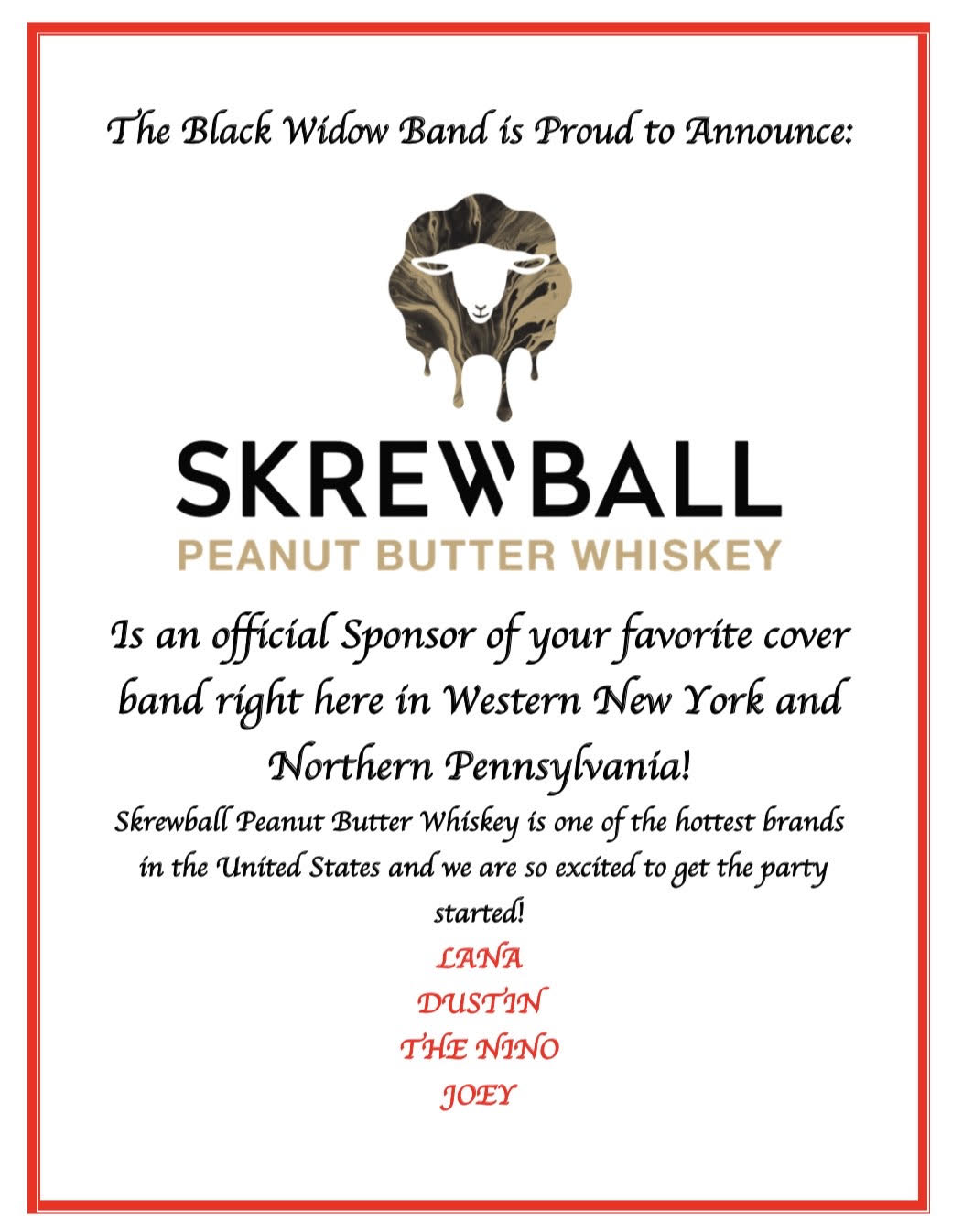 June
3 Animal Fundraiser TBA
9 OFF
10 OFF

The incredibly diverse repertoire of Black Widow, is performed by four of Buffalo’s most applauded musicians. As winners of over 50 Buffalo Music Awards, their raw talent, high-energy stage presence, and national-class production consistently ‘wow’ the Black Widow draw and newcomers alike.
Hits – all of them – are what Black Widow plays. The latest and the best party, rock, dance, country, and alternative songs are blended with all of the genres’ classics and oldies to make Black Widow positively versatile. This versatility is commonly threaded with one goal: to get the audience up and having the time of their life!
Listen to Lana as she sweetly covers the meekest love song and then draws the thunderous applause of everyone with a pulse while singing Janis Joplin.
Black Widow crowds blossom as their fans introduce their friends and family at the clubs; and even their children are brought to the all-ages concerts. This is a class act that knows their venue, always happily accommodating their fans and their employers.
Find Black Widow at your outdoor festivals, lawn fêtes, weddings, nightclubs, work parties and banquets. Been bitten yet?™

Lana Marie has won Best Female Rock Vocalist in the Nightlife Music Awards:
2010 and 2011 received an achievement award for consistently winning the past 8 years.
Best Rock Female Vocalist for the People’s Choice Awards:
2003, 2004, 2005

​The Nino formally from the Nationally known band The Outlaws
​
Black Widow’s Acoustic version Lana and Hund has won the Buffalo Music Awards for Best Duo in:
2004, 2005, 2006, 2008

“Black Widow is very versatile, playing songs from the 70s through today’s hits. If you close your eyes you would think it was the very artist performing.”
•Julie Goodpaster, Southtown Review

“Black Widow is a force to be seriously dealt with, serving up a booty shakin’, highly energized blend of rock/alternative music that elevates your mind to helium heights and slices into your soul like the finest surgical steel.”
•Jim Jannon, Alternative Press

“Black Widow has one goal in mind, to party the night away.They have
the most talented lineup of musicians that will leave you wanting more.”
--- Nightlife

“Black Widow proved again why they are a longtime area favorite. Lana Hergert was simply stunning and flawless on vocals, and Michael Hund is impeccable on guitar.”
•Bob Silvestri, bestofwny.com

Dustin Francis is the newest addition to the outstanding group of musicians that make up Black Widow. Don’t let the age fool you, the kid’s guitar work has some serious skill, old school vibe and modern flair. Dustin also kicks out vocals with a touch of soul and a whole lotta feel. Starting in high school, he would seek out the area’s best to watch and learn from, usually pretending he was with the band, so he could get in to clubs (he once actually carried in his own monitor speaker from home so he could watch, of all bands, Black Widow during a gig). After a few years, Dustin ended up getting to know and play with an extensive list of Buffalo veterans and Hall of Famers (present and future). Crowned regional King of the Blues in 2007 after winning the Guitar Center competition, he has only sought to expand his abilities and styles since – blending country, rock, and blues influences. Black Widow is a band that works hard so they can have fun and it looks like the “Boy” is in on that. Old Strats, Warm Tubes and a Cool Fuzz is all he needs. Current influences are Philip Sayce, Ritchie Kotzen, Jonny Lang, Brad Paisley, Eric Clapton, SRV, and of course Jimi Winner.
2010 and 2011, 2012, 2013 Dustin Won top Rock Guitarist for the Nightlife Music Awards

Started playing in elementary school band and continued instruction into college. Have 25 years experience playing and recording with some of Buffalo's best musicians including the Boneshakers, Davey Z Project, Silent Rage and Mick Hayes and The Barking Spiders. Experienced in many types of music and have wide ranging influences including but not limited to John Bonham, Stewart Copeland, Ringo Starr and Buddy Rich.
Won Best Rock Drummer for the Buffalo Music Awards in 2013

"The Missing Link"
Played in the National Known band, The Outlaws
vocals,bass, keyboards, guitar and drums